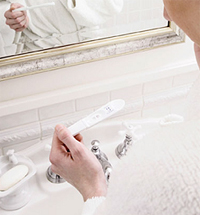 There are many people in the world today who have great difficulty in falling pregnant. There are a number of factors which can contribute to the issue, and these may include one, or all, of the following: