Congratulations, starting at week 9, the baby is no longer an embryo, but is now a fetus. The fetus is the developmental name for the rest of the pregnancy. From this point on, when referring to the baby, the term fetus will be used instead of embryo. The fetus is about the size of a grape during week 9. The fetus weighs roughly an ounce and will begin to start putting on more weight. The baby looks like you would expect a baby to look. Tiny fetal movements can be detected during week 9 ultrasounds.

The eyes are fully formed by week 9; however, they will remain fused shut until at least 27 weeks into the pregnancy. The formed eyes carry some pigmentation at this stage. The fetus has developed defined ears with tiny earlobes that might be visible on the ultrasound. The fetus is developing teeth during this week. By the end of the ninth week, the fetus will have a tongue with taste buds. All of the main internal organs are in place. The heart is fully formed with all four chambers, but is still bypassing the lungs. Ankles and wrists are the newest additions to the developing limbs. The external genitalia is beginning to form; however, it is still too early for the ultrasound to be able to depict gender. The uterus is continuing to grow. At 9 weeks, a healthy uterus is about the size of a small melon. This might seem like a lot of space seeing as the baby is only the size of a grape, but the uterus is preparing itself for the rapid development that the fetus will be undergoing in the upcoming months.

There are a lot of changes that are happening to the body during pregnancy. During the 9th week, many mothers experience nosebleeds and heartburn. It is unclear why some mothers experience nosebleeds, but in most cases they are relatively harmless. Heartburn is one of the expected symptoms of pregnancy. Expansion of the uterus and changes in diet help to contribute to heartburn. Be careful before taking any type of medicine for heartburn. Not all heartburn medications are safe for the developing fetus. Many mothers might find themselves with swollen feet or bulging veins. The bulging veins are caused by the additional blood they have pumping through them to support both mother and baby. The swollen feet are a normal symptom of pregnancy and it is recommended that if the feet are swollen then the mother should take a break and prop her feet up. Depression is a major issue during this stage in development. Hormone levels are all over the place and many women feel more vulnerable. This causes unexplained crying and mood swings. If the mother feels depressed, it is important that she discusses this with her doctor immediately. Depression is a serious medical condition and isn’t something that a person can just get over. Never be ashamed to talk with the doctor about depression.
Week 9 Pregnancy Ultrasound 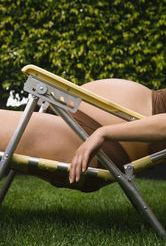 Stages Of Labor And Childbirth