This is the very beginning of it all. At this initial stage, there is no indication that a woman is pregnant. Morning sickness wouldn’t have started. There are no obvious symptoms and there is no actual baby in the uterus in this beginning stage which is why you won’t be able to see anything in an ultrasound. The body hasn’t began to shift to accommodate baby yet. This first week is the beginning part of the embryonic stage which consists of fertilization up until 8 weeks development.

Fertilization occurs when sperm meets with the secondary oocyte (mature egg), the process forms a zygote. Within the first 48 hours, the zygote will undergo mitosis, cell division, and start the process of cell division that it will continue throughout its life. Each cell divides into 2 cells and those cells continue to divide until the zygote is a bundle of cells. The more the cells divide, the smaller they become. The rapid cell division and the distribution of the cytoplasm into smaller cells is known as cleavage. The bundle of cells is considered the cleavage embryo.

The Journey to the Uterus and Implantation

At day three, the baby is a mass of cells. The form doesn’t start developing until later in the pregnancy. This mass of cells makes its way to the uterus with the help of ciliated lining of the uterine tubes and through a weak peristaltic contraction. Peristaltic contractions are how our bodies push things through our digestive tracts and reproduction tracts. The bundle of cells takes around 3 days to enter the uterus. Once it enters the uterus, it has a more solid form known as a morula. The morula doesn’t attach immediately to the uterine wall. Typically this takes an additional three days to happen, during this time hormones increase to promote a stable environment in the uterus. Cell division continues and the morula becomes hollow and the hollow structure is a blastocyst. At the end of the first week the blastocyst will superficially implant in the endometrium, which is the lining of the uterus. Before this point, the cells that have been developing are considered stem cells, which means that they could become any type of cell in the human body. They are considered the blank slate of cells.

The blastocyst implants and develops into the embryoblast which becomes the embryo proper. This is the developmental body of the baby. The process of implantation begins in this week and completes the process at the beginning of the second week. In this first week, the protective covering for the baby, the trophoblast, begins to produce small fingerlike extensions known as microvilli that it uses to attach itself to the endometrium, or the inner lining of the uterus. This secures implantation. Some women may experience a little bleeding when implantation occurs. It is a normal occurrence.

At this stage the baby is not susceptible to any nutritional issues. This means that if the mother is not eating right or taking care of herself, it is still too early in development for these factors to harm the developing baby.
While it might not seem like much, this first week is one of the most important weeks of the pregnancy. Without proper implantation, the pregnancy is not viable. This early, the mother wouldn’t have noticed the pregnancy. It is important that if the woman is trying to conceive, that she start taking vitamins and increasing her intake of a healthy and balanced diet. 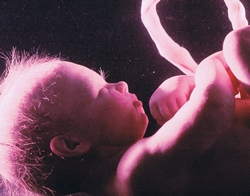 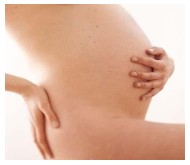 Your Pregnancy Week by Week

Sign up now, and recieve Weekly updates on how your pregnancy & your baby are developing. Including pictures, nutritional advice, info on symptoms and complications and so much more!

Do You Use Our New Forums??