How Soon Can a Blood Test Detect Pregnancy?

When a woman is trying to conceive, each day can seem difficult. She is almost dying in anticipation to know if she has hit the jackpot or not! When the ovum (female egg) is fertilized by the sperm (male egg), an embryo is formed and when the embryo attaches itself to the walls of the uterus, the woman’s body produces a hormone called Beta HCG (Human Chorionic Gonadotrophin) – the pregnancy hormone. A blood test is supposed to check for Beta HCG in the body. A blood pregnancy test is also referred to as the pregnancy serum tests. There are two types of blood pregnancy tests. Research has shown that a blood pregnancy test can detect a pregnancy earlier than a urine pregnancy test, one needs to keep a few things in mind. You may take a blood test before you miss your periods, but if you get a negative result then you’ll have to repeat the test after you miss your periods. Also, each woman is different from the other. While one woman may get a positive result on the blood test about a week before the period is missed, another woman may get a positive result one-two weeks after the period is missed. This is because every woman’s body is different from the other and the speed at which Beta HCG is produced will also differ from woman to woman. Deciding when you want to test and which test you want to use, is completely up to you. If you have the patience to wait till you miss your periods, you are more likely to get a positive result in the first go! Many women take a home pregnancy test in the privacy of their home and then move on to a blood pregnancy test. There are no contraindications about the method and timing of testing. For some women a home pregnancy test may not show a positive result, but a blood pregnancy test may give the desired result. A blood test is supposed to give more accurate results unless you’ve had a miscarriage recently and the Beta HCG of the past pregnancy is showing!
How Soon Can a Blood Test Detect Pregnancy? 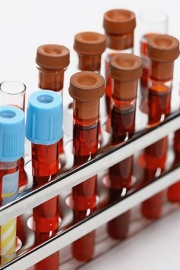